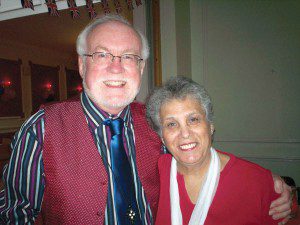 Samia and Trevor Hubble first met on Community in the seventies. They left to marry, to study, and after a curacy in South East London, to follow God’s call to share the life of the church in Lesotho and South Africa for 20 years. Lee Abbey London had proved to be a great foundation for an exciting and fulfilling ministry.

Now it is their turn to tell their story. To reflect on their challenges, and dreams for Lee Abbey London’s future. How have they managed their enormous workload, how will they let go of Lee Abbey London and what are their future plans?

Well, 39 years ago I used to work in the House/Kitchen Team, and we were called Housebods in those days. At the time of our marriage the warden was David Johnson. He used to treat me as a daughter and walked me down the aisle at our wedding. It has been a wonderful privilege during this ‘second time around’ to be parents to so many budding romances. One thing I will take away with me is that students and Community often refer to me as ‘mother of the house’.

Looking back, it is amazing the plans that God has had for us. We have had so much fun, laughter, and sadness when Community members had to leave, but also many challenges to face and making decisions that were not always easy.

Being Pastoral Assistant and House Manager, as well as mother and sometimes grandmother to Community members has been a huge challenge. I found being the House Manager was not easy when working with young people for whom being in Lee Abbey was their first experience of being away from home; used to having mother or a maid close at hand. I have tried to encourage the young people to act responsibly in their relationships with others in the hostel be they Community or students. Communicating Christ through relationships is easier said than done, but we did all we can and hopefully all that God wants us to do. Cross cultural encounter requires a real willingness to understand and appreciate the other’s point of view. I hope that when a person leaves Lee Abbey they will value difference and

see the world as a fruit salad where all the ingredients contribute to the colourfulness and taste of the whole.

Life has been full of activity, formal dinners, games, outings and worship. We had lots of fun. I have enjoyed Morning Prayers in particular and listening to the stories the young ones tell of their journeys in faith. I have found solace and refreshment in our services of Holy Communion on Wednesday evening. I would like to see more students and Community coming together through our communal worship.

I would not change much here and my recommendation would be to be very careful when approaching non-Christians here, particularly as we have students from all faiths and none, my knowledge of the Arab world tells me that the softly, softly approach still has great value.

My plans for the future are to take a break, look after our family, our grandchildren, and see what God has next in store for us. I certainly will leave with good memories and intend to keep in touch with my extended family and past Community members, who are close to our hearts.

When we first started here, it was my intention that all those who came through Lee Abbey London would leave feeling much more confident in themselves, valued and affirmed, that they would have grown in faith with a greater understanding of God and of themselves.

When I arrived, I found Community life was controlled by the needs of the business. It became my aim to give the Community much more of a say in the ministry and mission of this place. In my need to emphasise the importance of the ministry here I coined the phrase, ‘Without the business we would not be here, without the ministry we have no business to be here.’ Due to the need in past years to pay off debts the business, quite understandably, had come to overshadow the real reason for Lee Abbey being in London i.e. ‘to proclaim Christ through the ministry of a Community of Christians’.

I hope that we have now just about achieved the right balance between business and ministry, nevertheless, there must still be vigilance for the balance could easily be tipped too far the other way, resulting in the business being no longer viable and the ministry being lost.

On the whole I have been very impressed by the deep faith of so many Community members despite their being so young in years. It is quite challenging being with young people who come at different stages of their Christian journeys, particularly as they arrive with many different motives and God is not necessarily high on their list of priorities. It is our aim that during their time here God will move significantly up their list of priorities.

What I have learned to value is the lasting links we have formed with people from all over the world. I have particularly enjoyed taking groups of Community to the solitude of Devon for retreats where we have stayed in the Beach chalet, it is there that I got to know Community members and they me. We still get responses about this special time in their lives from those who have left, even five years ago.

I would like Community members to stay a little longer than for a year – things were very different in the seventies, when Samia and I left the first time round because: ‘we felt it was right and God was calling us on, rather than just because our time was coming to an end, but we are governed by different rules now.’

It was quite a challenge to invite the Movement to have their annual gathering in London. Now that we know it can be done I hope it will continue. I believe these gatherings have been valuable not only as an opportunity to showcase the work in London but also as a catalyst, bringing the different parts of the Movement closer together.

Hopes for the future

My vision for Lee Abbey includes the desire to place Community members at the very centre of all the structures of the Lee Abbey Movement, playing a full part in the decision-making processes. I know there are reasons why this cannot happen but that doesn’t prevent me from having the desire. Community is what makes Lee Abbey distinct from many other Christian organisations. Community members are the ones who are at the coal-face, daily, they have so much to offer which should not be lost. Encouraging Community members to give their insights and ideas at the Movement gatherings would be a good place to start.

I wish Lee Abbey London a long life and I pray that the reorientation and refurbishment happens before too long. I would particularly like to see a Chapel at the centre of the house symbolising Christ being at the centre of the Community and of each member’s life. A multi-faith prayer room would show our respect for those who come to God by a different path and a proper café providing a welcoming space with proper coffee.

Work and planning ahead

How did we manage the enormous workload, and people at the door at all times of day and night? By the grace of God, and at the cost of giving the chairman his ‘gray hairs’!

My personal plans for the future include a rest, plenty of sleep, cooking my own food and having quality time with Samia and the family. I expect that we will continue our association with Lee Abbey in some way, it is a difficult thing to get out of the bloodstream.

Lastly, I thank God for his love and faithfulness, during 37 exciting years of ordained ministry, but that is another story.