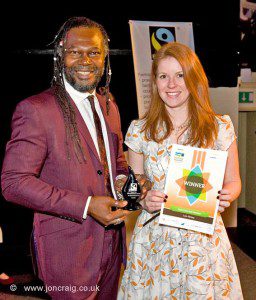 If you have used ‘Reggae Reggae Sauce’ then you will most probably know of Levi Roots as the entrepreneur who became a household name after he successfully pitched his Caribbean-inspired food range on the TV Series ‘Dragon’s Den’. Levi is a Fairtrade ambassador and on 8 March presented the South West Fairtrade Business Awards at Colston Hall in Bristol.

Lee Abbey Devon is all about Fairtrade. Over the last few years Pixie Rowe developed the shop, tea cottage and product range we stock in Devon, and we have focused on providing our Community and guests with the best of what Fairtrade can offer in terms of clothing, food and gifts.

Therefore, with the South West Fairtrade awards looming, Pixie submitted applications to the regional awards panel for consideration in the sections for accommodation, food and retail. In recent weeks we were delighted to be informed that Lee Abbey Devon had indeed been selected as one of the winners, but like all business ceremonies and the hype that surrounds them we didn’t know whether it was a Bronze, Silver or Gold award, or indeed for what section.

On the appointed day, Phil Crook and Kate Robinson – alas not Pixie as she was still on sabbatical – travelled to Colston Hall in Bristol to join business representatives from companies around the South West to have the various awards presented by Levi Roots. 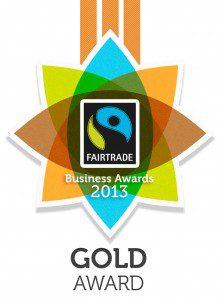 It was a great surprise to us all that in the sections we were nominated in, we won three major awards:

No other organisation took as many awards as Lee Abbey, so it was a great opportunity later to give people a brief overview about who we are and what we do, both in terms of our business and social ethics, as well as our Christian beliefs. To ensure we left a ‘presence,’ we provided a number of brochures for those who had no knowledge of Lee Abbey. They may not have known much about us when we arrived, but they certainly knew a lot about us when they left.

Commenting on Lee Abbey winning the awards, the judges said, ‘What an incredible range of Fairtrade products stocked and activities undertaken. This was a very strong category but this business won because they had such a consistent message coming through all they do. A very impressive entry!’

We give thanks to God for the opportunity to be part of the Fairtrade movement, enabling us to play a very important and active role in developing greater awareness, which helps improve the lives of producers and their families in developing countries, which in turn makes the world a fairer place to live.