This is an archived item that expired on 1 September 2016. 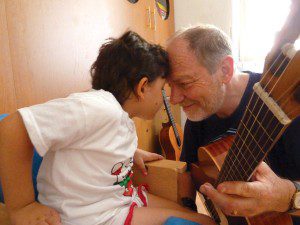 After seven years, composer and Music Therapist Adrian Snell is releasing an inspiring and thought provoking new album: Fierce Love. The album has many stories to tell, but one particular influence is Adrian’s work with children and young people with a variety of special needs. This influence comes from both the relationships he has formed, and the extraordinary range of instruments that are central to his work and now contribute to the unique soundscape of the album.

On 6 October 2103 at 8.10am, BBC Radio 4 broadcast their Sunday Worship programme from Three Ways School in Bath where Adrian works as Music Therapist and Arts Therapy Consultant. Adrian explains, ‘Within the framework of a service, the programme will reflect on the role of music and music therapy, in enabling our children and young people to express themselves, to communicate, to build their self esteem and understand their equal value and importance beyond their “special needs”. 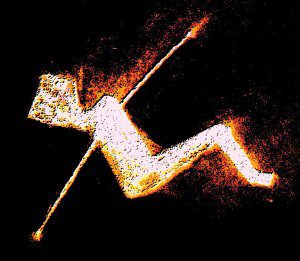 ‘One of the great privileges I have as the school’s music therapist is that I am focusing on what our children and young people can do, beyond their limitations. With music as the bridge between us, I witness the joy of seeing meaningful relationships develop as confidence grows.

‘This BBC programme intends to “drop in” on one or two sessions where music therapy, or music therapy techniques, are used. Interspersed between these moments, the programme will feature some of my music, in particular, songs from Fierce Love, released on 28 September.’

Sam Bromley spoke to Adrian about life, family, music, and faith – and, of course, Fierce Love his first album release in seven years.

Did your interest in music start from a very early age and was there a lot of music at home?

I can’t remember a time when music wasn’t an integral part of home life, and life in general. I think it’s become like a language to me … the language of my heart …

Do you describe yourself as a Christian composer/musician and did you make a conscious decision to use your musical gifts primarily to express your faith?

Actually, the answer to both is no. I’ve never sought to categorise or define myself in that way. As far as I’m concerned, my music, and my life and faith journeys, have always gone hand in hand, each influencing the other in a way. So my music, my songs, my lyrics can be about anything … but because my Christian faith goes very deep, the way I write or reflect on anything is bound to be from a Christian perspective.

Can you tell us something about your journey of faith?

I grew up in a deeply loving, caring Christian home. Although, of course, I couldn’t have explained it like this at the time, I guess I was privileged to live in an environment where faith actually formed the basis of family life. So the way I was brought up, the values instilled in me, the nature of relationships rooted in love and respect – when I needed to make my own, intellectual case for Christianity, I was able to reflect on what that meant in the context of home, what it felt like to be ‘cradled’ in faith.

From those profoundly formative years, of course, much has happened. My understanding has developed, my theology has shifted, my priorities have changed, but the rock of faith has always stood firm.

Perhaps one of the most significant chapters in my journey has been to fully embrace the Jewish roots of our Christian faith. My ‘world view’ is now, profoundly ‘Judeo Christian’ rather than just Christian. When I read the Bible now, I understand and think about it as one book, one extraordinary story of God’s involvement, dwelling with, guiding, loving, weeping over, his children, his world.

Did you receive a formal musical training, or are you mainly self-taught?

From about age five my mum and dad decided I needed piano lessons. I spent many hours at the piano, just exploring the sounds and the notes. This extraordinary piece of furniture, mainly wooden, but with hundreds of funny looking white and black things (the black things looked like chocolate fingers) which made a magical sound when you pressed them … Anyway, apparently the sounds I created gave them the idea that some direction would be helpful.

I worked through all the Associated Board of Music grades – 1 to 8, and by then had decided that I really wanted to go further with music, one way or another. I found a course at Leeds Music College, at the time the only course of its kind in the UK, called ‘The Advanced Study of Jazz and Light Music’.

By now I was also exploring other instruments – guitar, cello, double bass, and my voice! This course sounded much more interesting to me than a ‘standard’ one, so I auditioned, was accepted and did the three years required. At the end I received a diploma – LGSM – Licentiate of the Guildhall School of Music.

More recently, in 2000, I decided to train as a music therapist, and after two years study and training, received a Diploma in Music Therapy.

Who has inspired or influenced you musically?

If I had to single out two artists that have, in the last ten years, consistently inspired, challenged and influenced me, I would probably say Bjork and Peter Gabriel.

Do particular events or circumstances trigger compositions or are you inspired in other ways?

Yes to both. I love to interpret my experiences, my thoughts, feelings and concerns through the language of music, rather as someone might keep a written diary. I’ve been composing one way or another since I was five or six, and recording since I was 20 (in 1974!) I can listen back to my music over the last nearly 40 years, and immediately recall something of the person I was then, probably more accurately than looking through photo albums.

Most of us have nine to five jobs. How do you work?

Eight to Four – I should explain. I now work full time as a Music Therapist and Arts Therapy Consultant at Three Ways School in Bath, for children and young people with special needs. Hence the hours.

However, there is still the composer and recording artist in me, and as you know my first album in seven years will be launched on 28 September. When it comes to the working hours associated with this side of my life – well, it could be any hours of the day or night, depending on inspiration, recording studio schedules, and my wife!

You have a new album due for release shortly. Please tell us about it?

Yes, I’d love to! The album, is called Fierce Love. I’ve been recording it over the last 12 months. I’ve possibly had one of the most joyful experiences of recording I can remember. Partly because I love the music, the songs and words so much, but also because my dear son Jamie has produced it and my dear daughter, Carla, is our guest vocalist. It will, of course, sound heavily biased but, quite truthfully, I don’t think I’ve worked with a better producer, and I can’t think of any female singer whose voice blends so effectively with mine.

Something else that really excites me, is that Fierce Love integrates Adrian the composer, singer-songwriter, with Adrian, now Music Therapist. That ‘integration’ is about everything really. The instruments and soundscapes I’m working with, the hopes and dreams, fears and sorrows, the doubts and insights that belong to daily life, particularly amongst this extraordinary community of children and young people with special needs. Perhaps most significantly, much has changed in my thinking about my faith, my understanding of who God is … and where he is …

I am at the point where I can truthfully say I have never felt as close to God as when I live and work amongst the 168 children and young people, with pretty well every, or any, special need you can imagine, at Three Ways School.