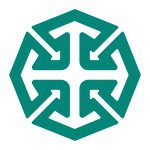 Hope means hearing the music of the future. Faith means dancing to it now.

It’s been an exciting time in the Movement over the last 12 months with much to give thanks for in Devon, London, our Small Missional Communities (SMCs) and in our Mission activities. All across the Movement there are ongoing plans and developments for continued growth and momentum. During the last year one of the topics that the Council, and all parts of the Movement, have been working on is to make sure we all have a common understanding of what it means to interpret the Lee Abbey vision for today. This is crucially important as we look to the future with hope and eager expectation. From its earliest beginnings Lee Abbey was a movement of God for evangelism and renewal, with a strong emphasis on resourcing, training and equipping the church and its people. We believe it remains so. We’re clear that our vision continues to be to ‘Communicate Christ through Relationships’. We continue to want to make this a reality through reaching out to offer God’s welcome in Devon, London and the SMCs, and all our Mission activity, in the context of that Christian mission and ministry. We’ve worked on the why, the what, the how, the where, the who, and the when, and summarised each of these elements in simple statements. 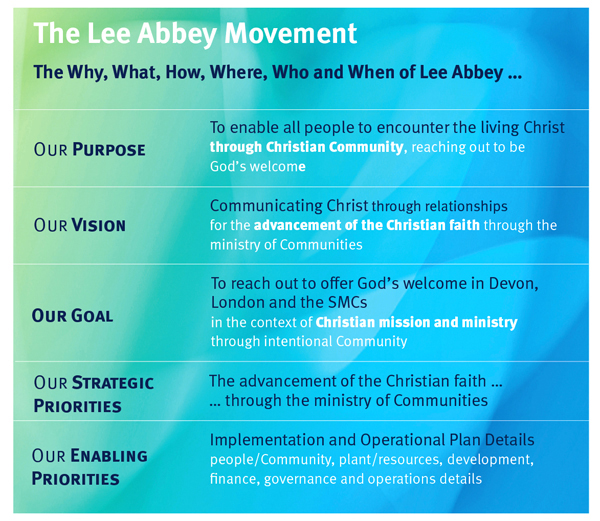 As we look around the world today we believe that the work of Lee Abbey has never been more important. In an increasingly post-Christendom, broken and fragmented world it is even more critical that God, and faith in him through a personal relationship with his son Jesus, is made real and relevant to all people. Whatever their age, background and circumstances, we believe that individual lives, the wider church and the societies in which we live can be renewed, transformed and made whole, and through that transformation all can grow to reach their full, God-given, potential. And, as Christ’s love is communicated through relationships and God’s love in action is demonstrated to all, the young and the old, the rich and the poor, the powerful and the powerless; lives are changed as people see the creator God revealed and encounter his risen Son. They are able to experience for themselves the life-giving presence of the Holy Spirit and know the power of God in their lives. In so doing, their relationship with our triune God, his creation and environment, and their fellow human beings, grows and deepens in significance, meaning and purpose.

As we’ve worked though these details over the past year or so also we’ve been able to spend more time thinking, praying and discussing what we believe God is calling us to, rather than the process of how we will achieve it. Our discussions have helped provide a framework for some of the big decisions that have been made over the last 12 months, not least of which is the planned refurbishment of the London Club, a refurbishment which will help facilitate a better integration of the Community with the residents and help us communicate Christ through relationships to them. We’ve been able to use some of the structures and processes to help us in our planning for Devon and the SMCs, and even our missions working alongside other churches.

Through all of this we know we have been supported by the prayers of the Lee Abbey Friends of Jesus, living testimony to the unshakable belief of our founders that prayer is the very underpinning of what we seek to do under God. Prayer enables all things, prayer changes all things, prayer transforms all things in a way which is beyond our wildest dreams and in a way in which no human plans can ever achieve. Thank you.

In November last year, a weekend for the Lee Abbey Movement was hosted by Lee Abbey Devon. A number of people from across the Movement came together to reflect back on the work of the Movement and to look forward to what God has in store for us as we move forward. There was a great sense of momentum and ‘movement’ as we met together and a real feeling of being one Movement, not several different parts. As we looked at the dynamics of the church and society in today’s world, and considered how we might respond as a Movement to our rapidly changing culture and context, we had input from Professor Linda Woodhead on Friday afternoon and a panel discussion with Linda and our President, Lord Carey on Friday evening. We heard truly inspirational stories from Devon, London, and the SMCs and from those leading our Youth and Children’s ministry, including the Camps.

They spoke of the faithfulness of God over the past few years and of lives transformed. They gave a vision of the plans and expectations they have under God for the future. This too contributed to the sense of anticipation, excitement, hope and momentum which seemed to underpin the whole weekend. We heard about our mission plans and were encouraged by friends from Scargill as they told of their amazing story of rebirth and regeneration, of openness to God and of blessing. Throughout the weekend in addition to all the input there were times too of reflection and discussion, of quiet and of prayer. And there were times just to be together as people of the Lee Abbey Movement, to hear each other’s stories and to be encouraged.

At our service of Holy Communion on the Sunday morning, Lord Carey quoted an American Bishop, Bill Frey. He said, ‘Hope means hearing the music of the future. Faith means dancing to it now.’ We look back on the last year with thanks for all that God has done and for the guidance we have from him for the future, and especially the next twelve months which promise to be equally exciting as the years just passed. We believe that as a people of God, in the Movement and beyond, we can hear, however faintly, the music of the future. God calls and invites us all, by faith, to dance to that music now.