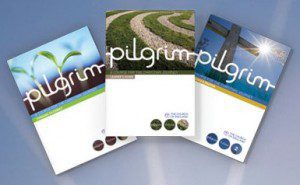 A new course, commissioned by the Church of England, aimed to inspire confident, transformative discipleship. Is this a rival to Alpha? Paula Gooder unpacks the Pilgrim course.

Early this year the final two books in the series of eight that make up the Pilgrim course will be published. Pilgrim is a discipleship course commissioned by the Church of England’s House of Bishops in an attempt to reinvigorate and re-inspire discipleship. You might well be wondering why we need yet another discipleship course. There are lots of excellent ones on the market already – the Alpha course, the Start course, Christianity Explored, Emmaus, to name a few. Why on earth would anyone want to develop yet another one? What’s wrong with the others? Why not just stick with those already published?

The four authors of the Pilgrim course, Bishops Steven Croft, Stephen Cottrell, Robert Atwell and I, are very clear that there is nothing wrong with of the other courses on the market. All of them respond to certain needs within our different churches. As we began to develop the idea, however, we became more and more aware of the need for a specifically and consciously Anglican discipleship course.

What makes it ‘Anglican’ is that it is based upon and draws from Anglican worship and tradition. Not only does it have extensive quotations drawn from a wide range of texts written at various points throughout Christian history, it also focuses its content around issues such as baptism, the Eucharist and the creeds. This doesn’t mean that it can only be used by people from the Church of England, but it was written with the kinds of questions in mind that Anglicans
often ask.

As a result it differs from some of the other courses in its focus, but it also differs in its method. Pilgrim is based on a model of ‘participation’ not ‘persuasion’. Most discipleship courses seek to persuade people of the truth of Christianity by providing all of the answers that people might need. This is done so well elsewhere that we felt no need to do it again. Instead we chose a different method: one drawn more from John’s Gospel and, in particular, from one of its phrases that recurs throughout that gospel: ‘come and see’. Our hope is that people who are feeling God’s call in their lives (whether as the very first step into faith or as one more step along a way that they have been treading a while) will want to ‘come and see’, to listen to what God has to say in Scripture; to discuss with others what this might mean and to place themselves before God in worship.

The course is built around listening to God speaking in Scripture and engaging with a reflection written by someone on a particular theme. These lead into discussion and reflection and, we hope, to participants beginning to get a sense of what they might think about the theme of the week. There are many different ways that you can use the course. Some people read the reflections in advance and come ready to discuss the issues. Others listen to the audio podcast and use that as the way into discussion. Others still use the video clips as a way in. The material can be used in all sorts of different ways and the key to using the course successfully is to find what works in each group or context.

Another feature of the course, which is easier to see once all eight booklets have come out, is that this is not a one -off course. If you do it all you will do eight lots of six sessions; four in the follow stage and four in the grow stage. Very few groups will do them all one after the other. Most groups may not ever do them all but part of the point of the structure of the course is that we do not believe that one discipleship course is all you ever need to do. Our idea is that you carry on going and keep learning in whatever way suits you best.

Having said all of this, I think I can speak on behalf of all the authors of the course when I say that our great passion and concern is not the Pilgrim course itself – but confident, transformative discipleship. The word ‘disciple’ means simply a learner and we are all called to learn whether we are at the start of our journey of faith or quite a long way along it.

Jesus calls us to a life of learning, of journeying onwards as we seek to live out our faith day by day. As writers of this new course our great desire is to introduce as many people as possible to the joy of a committed, growing, learning faith that bubbles over so infectiously that we cannot help but share it with others. Whether you decide to use the course we wrote or not, our prayer is that all churches, not only in England but across the world, might be places full of people who have heard Jesus’ call ‘come and see’, who came, saw, believed and committed themselves to journey onwards with him proclaiming the Kingdom of God to all along the way.

Dr Paula Gooder is a freelance writer and lecturer in Biblical studies, a Reader in the Church of England and a lay member of the General Synod. She is also Theologian in Residence for the Bible Society, and an honorary Canon Theologian at Birmingham and Guildford Cathedrals.