Lee Abbey Warden David Rowe considers the beauty of creation and the way God brings order out of chaos so that nothing is lost.

Marghanita Laski, the avowed atheist and literary critic, was once asked to speak at York University on what she liked about the Christian faith. An interesting choice of speaker for the subject! Nevertheless, she is reputed to have highlighted three things that she liked about Jesus. 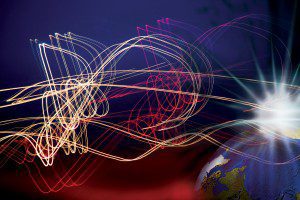 From the mouth of a professed atheist that is not a bad summary of the life and ministry of Jesus. He makes things beautiful again.

Now there is nothing more awe-inspiring than having the imagination touched afresh with the beauty and wonder of creation … however we choose to perceive it. From the micro to the macro of all things in the universe we are inspired with a fresh sense of its beauty. And even if it is marred and scarred, ‘seared with trade; bleared, smeared with toil; / And wears man’s smudge and shares man’s smell:’ as Gerard Manley Hopkins reminds us, in his poem God’s Grandeur, still, ‘nature is never spent / There lives the dearest freshness deep down things’; … And ‘the Holy Ghost over the bent/ World broods with warm breast and with ah! bright wings.’ There is a beauty.

There is a beauty in the rhythm of creativity that we see from the first biblical account of creation. As the first book of the Hebrew canon unfolds we are confronted with a liturgy, with poetry; a rhythmic attempt to remind us of the beauty and order of the Creator.

As a literary and poetic piece the narrative is arranged in a sequence of seven days. I am told that the style is set to make it easier to remember; rather like an early creed or piece of liturgy to recite.

Six times it concludes with the phrase, ‘And there was evening and there was morning …’ followed by the number of the day.

The seventh day is treated differently – the announcement begins with ‘and on the seventh day …’ And the phrase ‘seventh day’ is repeated twice more. Therefore God’s work of creation is conveyed to us rhythmically: 1 2 3 4 5 6
7 7 7.

There are two sets of three days each, of creation activity. The first three give form to the chaos. The second three fill the creation emptiness. Then follows the seventh day creation rest in triplicate. As well as that, the third day of each creation three day set, is a double creation.

On day three there is land and vegetation. On day 6, mammals and humans, so the pattern becomes: 1 2 3/3, 4 5 6/6, followed by 7 7 7. The style enables the text to get inside us in a unique way – it is rather like the Psalmist using an acrostic where each phrase of the Psalm begins with the next letter of the Hebrew alphabet, like Psalm 119. These are great teaching tools.

Order out of chaos

This sense of order and rhythm would have been a huge reassurance to those experiencing the chaos and disorientation of slavery and exile; that there is a God who speaks and order is brought out of chaos; new life is breathed into the void. Creation sings a tune of hope.

The mathematical physicist, John Polkinghorne, uses the image of musical improvisation to capture a sense of this magnificent creation:

‘The history of the universe is understood to resemble an unfolding improvisation in which the Creator is ceaselessly at work to bring about a harmonious resolution of the great multi-part fugue of creation.’ (Theology in the Context of Science)

C.S.Lewis tried to capture the same thing in the opening book of his Narnia Chronicles. In The Magician’s Nephew Digory and Polly step out of a dying world into one that is about to be born. A huge lion paces up and down the empty world and sings it into being. First the stars, then land, mountains, hills, vegetation and animals and birds; all rise up out of the lion’s song. It is Aslan and he sings Narnia into being. The imagery is beautiful.

Tolkien goes several steps further and uses music and song in his own cosmic creation story. In the Silmarillion, Iluvatar (the Creator) calls the Ainur (Angels) together and speaks to them themes of music, which they in turn, filled with wonder, pick up and begin to sing. Through the song of the Ainur the universe takes form; but Melkor, the evil one, sings discordant notes and this distracts and disrupts the Ainur. The result is a cacophony of sound and a huge disruption to the harmony. But Iluvatar then takes up all those sounds and weaves them into his creation music … so that nothing is lost.

And this is the point I want to make about the beauty of the creativity of God. Nothing is lost. Nothing is wasted. Paul understood this in his great chapter in Romans 8:28: ‘We know that God works all things together for good, for those who love him, who are called according to his purpose.’

This follows his great statement that ‘the sufferings of this time are not worth comparing with the glory about to be revealed to us. For the creation waits with eager longing for the revealing of the children of God … the creation itself will be set free from its bondage to decay …’ Romans 8:18-21

God takes all the notes … and weaves them into his own music … nothing is wasted, nothing is lost.

The moods of Psalms

The great Hebrew song book of Psalms illustrates this too. The psalmist includes all moods. The easy praise ones, where everything is good and all is well. The new song tunes where once our lives were in a mess but now he has lifted us up and given us a new song to sing and a new dance. And also the discordant ones which contain the questions and the cries of ‘Why?’ or ‘How much longer?’ or ‘Why have you hidden your face from me? ‘Why have you forsaken me?’ All these are included in the song book because lament is part of the music of creation and is woven into God’s great song of hope.