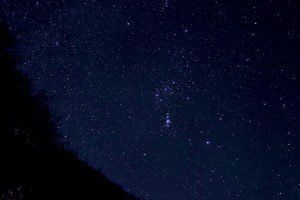 Graham Swinerd and John Bryant consider the evidence of divine design in our awe-inspiring universe.

We live in an amazing universe. The physical world, from the tiniest sub-atomic particle to the unimaginable vastness of space, provokes a sense of awe. The biological world, from the closely controlled, beautifully complex, activities of molecules and cells up to the equally complex interactions of living organisms in ecosystems, is just as awe-inspiring. Once upon a time the Psalmist saw the glory of God in the night sky. But now, with the benefit of the discoveries being made by those studying the science of life, we can also see his glory within us.

We, as respectively an astronomer, Graham Swinerd, (strictly Graham would say he is a space scientist and engineer, with a life-long interest in astronomy) and a molecular biologist John Bryant, have been privileged to work as scientists and to investigate particular aspects of this amazing universe. In doing so we have encountered, in a very real way, the work of God the Creator and we share with Copernicus the conviction that discovering things about creation is a form of worship.

Nevertheless, we are aware of those who think that religious belief is incompatible with the ‘rationality’ of science. What do we make of this? The role of science is to investigate the material world, including its biological components, at all levels using observation, measurement and experimentation. This approach has answered many questions about how the universe works, but there remain deep and important questions that lie beyond the reach of science. Now, there are some who say that the only aspects of existence that are ‘real’ are those that science can investigate; there is nothing else. This is known as scientism and we need to say that there is nothing in the practice of science that supports this view. It is actually unscientific to claim that science disproves the existence of non-material levels of existence. Thus science can neither prove nor disprove the existence of God.

Thinking about the physical aspects of the universe, the current understanding is that, in the words of a popular TV show, ‘it started with a big bang.’ What is not widely known is that the Big Bang Theory was first proposed formally by a Christian, a Roman Catholic priest and professor of physics, Georges Lemaître. He saw no problem in separating a mechanism, namely the Big Bang, from the agency behind the mechanism, namely God. In a similar way we can describe in detail the physics, chemistry and biochemistry of a cup of coffee, but that does not remove the fact someone made the coffee.

But let’s return to the Big Bang by which the universe was born from nothing 13.8 billion years ago. That is astounding in itself but just as astounding is the fact that at the earliest measurable time, 10–43 seconds after the Big Bang – a period of time which makes the blink of an eye seem like an eternity – the laws of nature that govern the way that the material of the universe works, were already imprinted on the fabric of the cosmos. Subsequently, the behaviour of matter and energy – ‘stuff’ – has been governed very precisely by these laws  and that has enabled the universe to develop galaxies, stars, solar systems, planets and ultimately us.

The question of where these laws came from – who or what is the law giver? – is one that has not been addressed by science. Crucially, we do not currently have a scientific theory to describe the instant of creation at ‘time zero’, as the unification of the theory of the very small (quantum mechanics) with the theory of the very large (gravity) continues to evade the ingenuity of the physics community.

Another hugely impressive feature of the universe is that these governing laws of nature, that science has uncovered, are very finely-tuned to allow the existence of life. Many (non-believing) cosmologists now agree that the impression of design is overwhelming, to the degree that it has become a challenge to the physics community to explain why this is so.  Although not providing a proof of a creator, this amazing discovery nevertheless provides a strong pointer to the existence of a creative God behind it all. This fascinating issue will be explored in the conference week in February.

During the ongoing evolution of the universe, our beautiful planet Earth was formed about 4.5 billion years ago. The world, as we know it now, has been shaped by dramatic and sometimes violent thermal, tectonic and geological changes. We can see evidence for some of those changes in the land-forms and rocks around Lee Abbey and across the Bristol Channel in South Wales.

The origin of life

Moving up to the biological level, it is currently thought that life first appeared about 3.5 to 3.7 billion years ago. We know very little about those early life forms and we have no specific information about how they originated. The origin of life thus remains a mystery. However, the fact that in currently living organisms DNA is the universal genetic material suggests strongly that this feature goes a very long way back in the evolution of life. Indeed, John Bryant often paraphrases verse 6 of Psalm 150
as ‘Let everything that has DNA praise the Lord’.

The evidence for evolution is, in the view of nearly all biologists, overwhelming. This evidence lies in the fossil record, in comparative anatomy, physiology and biochemistry, in genetics and increasingly, in genomics, i.e. the ability to compare in detail specific genes and arrangements of genes between organisms. Thus we can build ‘family trees’ that indicate the past and present relationships between organisms.

Evolution of the earth

However, we must not view biological evolution in isolation from the evolution of the Earth. For example, the development of photosynthesis, the process in which cells (initially types of bacterial cells, but now also most widely seen in plant cells) capture energy from the sun to make basic chemical building blocks for cellular growth and nutrition, had two major effects on the planet. Firstly, oxygen began to build up in the atmosphere, making possible the evolution of ‘aerobic’ or air-breathing organisms. Secondly, photosynthesis lowers the concentration of carbon dioxide in the atmosphere.

As is widely known, carbon dioxide is a greenhouse gas and so lowering the amount in the atmosphere reduced the temperature of the planet. Another significant evolutionary event was the invasion of the land by plants, which, because of the interactions between plants, geology and atmosphere, changed the land forever and paved the way for the evolution of terrestrial animals.

There are many misconceptions about evolution; here we want to dispel just one of them, namely that it is just about individual survival. Darwin never used the term ‘survival of the fittest’. Rather, the mechanisms of natural selection by which evolution proceeds mean that greater reproductive success will be enjoyed by those organisms that are best suited to the environment. However, that environment includes many other living things.

Evolution thus involves interactions with other organisms such that we see a whole range of inter-dependences, ranging from, for example, plant-pollinator interactions (on which humans are also dependent) to complex webs of inter-dependences in whole ecosystems. Evolution then is an amazing story and has led, through myriad changes, to life on Earth as we now know it.

Please join us for an intimate house party located in The Beacon Centre in February, to explore how scientific revelation informs us about how awesome is our creator God – we’d love to see you. Our conference will include an afternoon walk in which we will look at the biological and geological aspects of the local environment and, clear skies permitting, star-gazing sessions after dinner. We will walk the walk as well as talking the talk!

Graham and John are leading a week at Lee Abbey Devon called “Looking up and looking around: God, science and nature” from 8 to 12 February 2016.