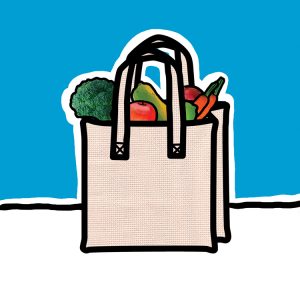 Andy Lester and Ruth Valerio examine how we can live well whilst also protecting the needs of the planet.

What comes to your mind when you think of food? Do you picture a table laid with delicious food, like at Christmas? Or maybe tempting cakes that you know you should resist? Or do you see food as a fuel that simply has to be eaten in order to get on with everything else you need to do? Is food a pleasure to be savoured or a daily routine to be undertaken?

In October this year we, Andy Lester and Ruth Valerio, will be speaking on this important topic. To whet your appetite we want to ask two questions: why is what and how we eat important for the planet? And is there any theological thinking we can do around this subject?

What and how we eat

Many of us know that modern-day intensive farming systems are one of the biggest contributors to climate change, habitat loss and a growing reliance on converting land from food for people to food for animals. Our love affair with meat has become a huge challenge for energy use world-wide. Our passion for sweets, cakes and biscuits has led to ever increasing areas of rainforest being converted to palm oil plantations.

Water shortages have been exacerbated by the way we farm. In many developed nations, the governments are responsible for subsidising over-production at the expense of wildlife management. The net result (according to the British Trust for Ornithology) has been a staggering loss of species – farmland in the UK has lost upwards of 50% of its wildlife since 1960, and in the US the figures are even higher.

That’s the background – but what about food itself? According to the United Nations Environment Programme ONE THIRD of the world’s food never gets eaten. That is 1.3 BILLION tonnes of food waste a year. It either gets thrown away before consumption; or is chucked in a bin because the portion size was too big or not stored correctly. In the most developed countries (Europe,
N America and Australasia) 222 million tonnes are binned each year. In Sub-Saharan Africa annual food production is approximately 230 million tonnes. So we in the west are throwing away almost as much as most of Africa produces.

And what is happening in the UK? We often blame restaurants and supermarkets for throwing out food. But it may surprise you to learn that over 50% of food waste is from our homes. Normally we succumb to ‘buy one get one free’ or ‘50% extra free,’ and then don’t use the extra. We also like putting too much on our plates and then realising we can’t manage what is in front of us. The other fact is that we interpret ‘display until’ and ‘use by’ as the same thing and throw away perfectly good food. 15 million tonnes of food are thrown into household bins each year. The cost to the average family of four on household bills is about £700 a year, that’s almost £60 per month!

Things are changing. In some countries the amount of food wasted is going down. If every UK household committed to reduce food waste by 20%, that would be enough food to fill 23 million wheelie bins a year – or feed a small African country for an entire year.

As well as the practical aspects of food production and consumption, there are the theological aspects too. Here are two ways that we might like to look at food from a Christian perspective.

How we view the food we eat – what we see it as being – impacts our whole attitude towards it, whether we approach it with nurture and care or thoughtlessly and neglectfully.

Genesis 1:26-31 gives us our foundational theological principle for how we should view food as Christians: it is part of God’s creation, which he pronounced as being very, very, GOOD! Food is a part of a very good created world.

This is vital for us to grasp because for too long we have held a strange dualism that has only given significance to activities that are seen as ‘spiritual.’ Something as mundane as food could never be a subject that Christians should be interested in! But Genesis 1 teaches us that this is wrong. God is interested in everything that he has created and so how we eat is every bit as important to Him as any other area of our lives.

We live in a world in which 870 million people suffer from hunger and in which undernutrition contributes to five million deaths of children under five each year in developing countries. Women make up a little over half of the world’s population, but account for over 60 percent of the world’s hungry.

One out of four children – roughly 146 million – in developing countries is underweight, and 66 million primary school-age children attend classes hungry across the developing world, with 23 million in Africa alone. At the same time, around 500 million adults are obese and 40 million children under the age of five are overweight.

A Biblical picture of contentment and security

It is with these figures ringing in our heads that we read the beautiful description in Micah 4 of what God intends the world to look like: a time when there will be no more conflict and people will follow God’s good laws and walk in His paths. In the midst of this we are assured that ‘everyone will sit under their own vine and under their own fig-tree’. It is an inspirational picture of balance and enough: a depiction of contentment and security.

Our modern food system is implacably opposed to such a picture. It creates bigger and bigger farms and places control in the hands of fewer and fewer companies. The debate that currently rages around our world is between countries and businesses who fight for food security, and farmers and individuals who fight rather for food sovereignty. These are two very different systems and produce two very different results.

As followers of Jesus we want to work for Micah 4:4, for a world in which the massive inequalities that exist between us are eradicated and each person can be in control of the food they eat and produce.

So, come and join us for Food and Faith, at Lee Abbey Devon in October to hear more and, in the meantime, be thankful for the good food you eat, and enjoy it with a generous and mindful heart.

Join us at Lee Abbey Devon for “Food for thought!”

This week we will take an imaginative and interactive look at our relationship with food. Ruth Valerio will explore how a Biblical theology of food can help us eat well in a hungry world and Andy Lester will look at what can be done practically to stay within our means.