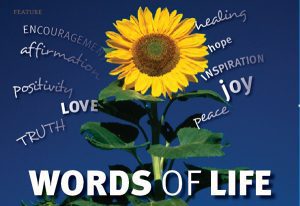 It was Tuesday 21 November 2006 and Annie and I were in Gig Harbour, Washington State, North America, about three quarters of an hour’s drive from the city of Seattle. That night our hosts, Danny and Amy, had invited eight of their closest friends round for dinner, to celebrate Amy’s birthday. We enjoyed a lovely meal together, with great food and wholesome conversations. But then something beautiful took place, the memory of which has been imprinted in our minds ever since.

One of the guests, a man by the name of Jason, called the table to order and then began to speak directly to Amy, the ‘birthday girl’. His words were so positive about her, and affirmed her in who she was as a person, her giftings, and how inspirational she was to him as a follower of Jesus. Initially, I felt slightly awkward, thinking to myself, ‘that’s Danny’s wife, you are expressing your heart to’, and ‘what does your own wife, (who was sitting next to Jason) think about you saying those things to another woman?’ But then, no sooner had Jason finished than another guest took up the roll of championing Amy and then another, and then another. I don’t recall whether all of her friends spoke, or whether it was just a handful, but it was a wonderful experience to witness. They called it ‘Firehosing’, very apt because Jason, who had initiated it all, was, and still is, a fireman in Gig Harbour!

The next day I attended a men’s prayer breakfast. At this event there was another ‘firehose’. This time, the recipient was a man whose personal reputation was being publicly scrutinised in the press, at the same time that he was also coming to terms with a family tragedy. What struck me about how his friends spoke to him was the way that they used words to encourage him into being the man God had designed him to be, rather than shower him with pity. More on this later. The next day we attended a ‘Thanksgiving’ meal, and our host was a single parent. Yes, she too was ‘firehosed’. And then, before we left for England, Annie and I received our own firehosing.

These experiences have stayed long in the memory. What struck us on that trip was how speaking ‘Words of Life’ over people was not just reserved for special celebrations, like birthdays, but that this practice was an intrinsic part of their lives as followers of Jesus. Inevitably when you experience something like this it is natural to quiz those who are modelling it to you, as to what it’s all about. In the rest of this article, I hope to explain this.

The power of our words

Proverbs 18:21 says this: ‘The tongue can bring death or life’. Or, put another way, what we say to people can either encourage them to achieve great things or it can sow negative thoughts and even destroy them. In the film ‘Walk the Line’, about Johnny Cash, we see the power that negative words (words of death) can have. Early on in the film, there is a scene where Cash’s father speaks these words to his son ‘Nothing, nothing, that’s what you are.’

Later on in the film, Cash, by now a successful music star but struggling with drug addiction, invites his parents to a thanksgiving meal. At the meal his father repeats those words of death over his son, ‘Nothing, nothing, you pill-popping big rock star, living in an empty house, with children you don’t see, … you’ve got nothing, nothing’ … and at that point Johnny Cash leaves the room, slamming the door.

Contrast this with the power of the words of life, that the angel speaks to the Biblical character Gideon, in Judges 6:12: ‘The angel of the Lord appeared to him and said: “Mighty hero, the Lord is with you!”’ There was nothing in Gideon’s early life which pointed to him being a mighty hero, but that is how God saw him and what the angel declared over him. Slowly but surely, he walks into his destiny.

The apostle Paul echoes such sentiments over all believers when he declares, in Ephesians 2:10, that we are ‘God’s masterpieces’. Paul himself was given a huge ‘word of life’ at the very beginning of his life as a follower of Christ. Blinded, he is led to Damascus, where Ananias, directed by the Lord, lays his hands on Paul and recognises Paul’s calling to be a ‘chosen instrument to take my message to the Gentiles and to kings, as well as to the people of Israel.’ Slightly different from being known as a murderer of Christians.

Since we returned from Gig Harbour in 2006, we have intentionally tried to build a home where one of the core values is to speak words of life over each other. We have asked the Lord to show us how uniquely he has designed each of our children and we try to firehose them with these truths as much as we can, be it through birthday cards, text messages, chats over hot chocolate or ice cream in a cafe. Sometimes when we have realised that a conversation at home is straying into the negative we have a ‘time out,’ before re-engaging with positive chat. It has taken time to do this.

One of the things that we were very aware of when Annie and I reflected on our time in Gig Harbour was how easy it was for us to slip into grumbling and gossip. What we noticed over that week was that our American friends refused to collude with us when we did so, choosing instead to focus on speaking positive words about everyone. These days every now and then one of our kids might need to remind me (‘Words of life, Daddy?’), but such is our desire to create an environment where each person is honoured and encouraged into who the Lord has created them
to be, it is relatively easy to receive
such a rebuke.

Earlier in the article I mentioned how the men in Gig Harbour had spoken words of life over their friend who was experiencing troublesome times and who could easily have been tempted to slip into self-pity, or receive lots of ‘poor you’s’ from his friends. Words of life are not sentimental. They are words that call out the original design of the recipient. Gideon was not walking in his design as a mighty hero. In fact, he was expressing self-pity, because of his circumstances. But the word ‘Mighty hero,’ must have impacted his spirit. When the men gathered round their friend in Gig Harbour they reminded him of all his special qualities as a husband and a father. I remember one of his friends then asking him whether he had given his wife flowers recently. He hadn’t. He was lovingly rebuked, not by their words, but by his realisation that he had fallen into self-pity because of his circumstances. He left the room a new man, restored by the power of truthful words spoken into his life.

Sometimes people comment that this stuff is all a bit unrealistic and a ‘good gossip/grumble’ every now and then is only natural. Others add that part of being British is to enjoy a good banter, and sarcastic humour is just a bit of fun. But I can’t agree. Our airwaves have quite enough stories of disasters and fallouts, jokes at other people’s expense and rant shows. We need a better balance. Words of life shift negative atmospheres in a room, within seconds. Words of life can launch people into their destiny. Words of life bring healing to the wounded soul.

Join us at Lee Abbey Devon for “Words of Life“

The words we say or speak with our tongues have great power; they can build up or destroy. Ten years ago Silas and Annie began to intentionally set about creating a culture of ‘Words of Life’, starting between themselves as a married couple, then within their immediate and wider family and then within their church community as a whole. Expect to be blessed, built up, encouraged and restored. This will be a week rich in Biblical teaching and prayer ministry.