This article was published in the January to April 2017 issue of Rapport magazine.

Two years ago, one of us experienced a volcano erupting close up for the first time. After decades of studying the physics behind volcanoes, it was wonderful to finally be there to watch lava spouting out of the earth – it was awesome in the true meaning of the word. This particular eruption happened to be in the middle of a volcanic desert on Iceland. No harm was caused to people, despite it being the largest eruption in 250 years and lasting six months. This area had been the focus of eight years of research by Bob and his team, so it was instrumented better than any other similar event in the world. 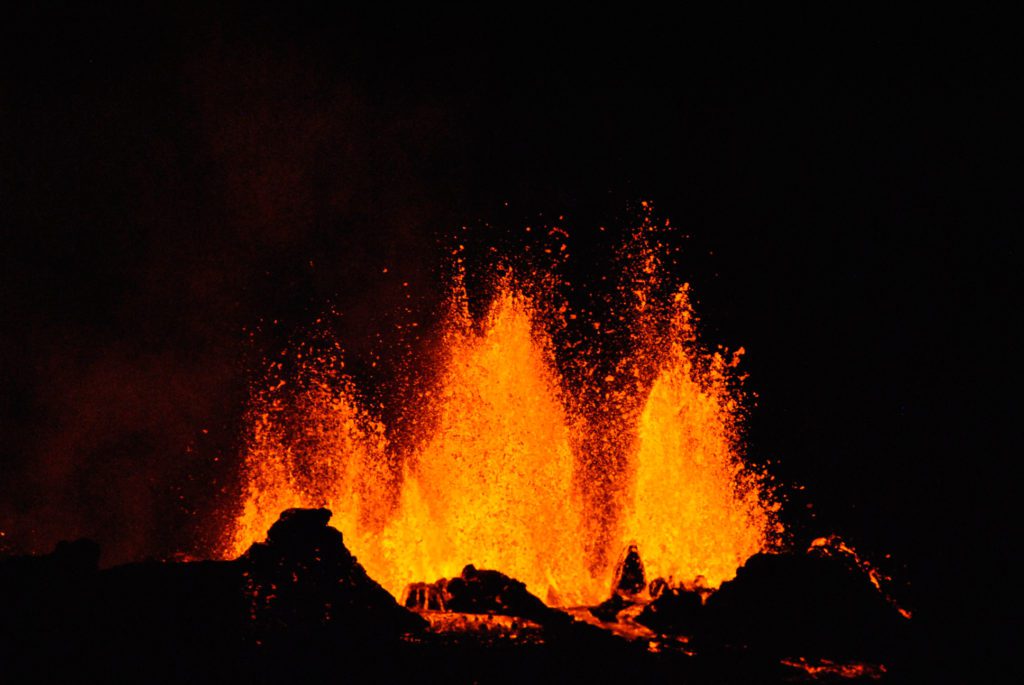 Bob comments: ‘In the night we got upwind of the eruption and had a spectacular firework show. This was creation at its rawest, better than the most inventive art installation. Behind us the sky shimmered green with waves of Northern Lights pierced by pinpricks of stars. In front of us was a wall of deep red flames as lava fountained 300 feet and more into the sky. The molten rock fell to earth as balls of glowing crimson which quickly faded to a deep red and then black as their outsides cooled. When they hit the cinder cones around the fissures these black balls exploded in flashes of orange, and a stream of glowing lava spilled over and coalesced into a flowing river of deep red molten rock.

‘The raw power of a volcanic eruption has to be experienced to be understood. It assaults all the senses simultaneously: the eyes with the depth of the colours; the ears with the jumbo-jet sound of the fountaining fire and continuous tinkling of breaking glass as the lava front chilled and avalanched forward; the nose by odours reminiscent of the smelliest chemistry lab at school. As a scientist, I knew that every second more than 400 tons of molten rock at over 1000 degrees Centigrade was being spewed out of the fissures in the ground. This eruption produced as much energy as a Hiroshima-sized nuclear bomb detonated every two minutes for hour after hour, day after day, week after week.’

Science may be useful in a functional way, but it is far, far more than that. Sights like this can fuel our worship of God by showing us the greatness of the world he created. Detailed and intricate work on the tiniest microbes can remind us that every aspect of creation has intrinsic value, regardless of whether we receive anything directly from it or not. Rocks, water, air, soil and all the organisms that inhabit them, are wonderful, interconnected, and beautiful in their own way. Lack of resources may force scientists to direct their energies towards immediately useful outcomes as much as possible, but studying the world God made is a valuable thing to do in and of itself. As Michael Faraday said, ‘The book of nature, which we have to read, is written by the finger of God.’

Take DNA for example. A single cell in your body contains two metres of the stuff, a millionth of a millimetre wide, coiled around a series of proteins like a string of beads then twisted up into chromosomes. With around three trillion  DNA-containing cells in the average human body (the rest are all red blood cells, which have broken down their DNA to make space for oxygen-carrying haemoglobin); that makes for around six billion kilometres of DNA. It can be hard to get a mental grip on a number like this, which is on an astronomical rather than a biological scale. One way to picture it is if you took all the DNA in your body out and added it end to end, it could take
you to the sun and back twenty times. If you didn’t mind about making a return trip, it could take you past Neptune and part of the way to Pluto. This sort of mental experiment can help remind us that we are indeed ‘fearfully and wonderfully made’!

Experiencing and learning about creation can also remind us of aspects of God’s character. It’s as if – as the theologian Alister McGrath often says – you are looking at the world through the lens of theology. The things science reveals make sense in the light of our knowledge about God. Do incredibly ordered processes, such as fractal patterns in tree growth or the Fibonacci series in flowers, reflect God’s rationality? Does the immense diversity of living things demonstrate his great creativity? What about the immensity of the universe? None of this is proof, or even strong evidence, for God’s existence but it raises questions for some people.

In another biological wonder, evolutionary processes seem to be following the same pathways again and again. Eyes like ours have evolved at least eight separate times. Legs, wings, the transparent properties of the lens – all these have emerged many times in biological history. Scientifically, the question is whether one can understand the reasons for this: some grand theory of biology that reveals the interconnections between forces and constraints in the living world. More philosophically or even theologically, the question is why we interpret the world to have such a strong sense of purpose, as if we were meant to be here? Is this compatible with what we see in biology?

The ultimate purpose of creation is to praise God. Psalm 19 says that ‘The heavens declare the glory of God; the skies proclaim the work of his hands …They have no speech, they use no words …Yet their voice goes out into all the earth, …’ Or as Psalm 150 says, ‘Let everything that has breath praise the Lord.’ We are not the centre of the universe or the reason for its existence. God is.

So what does this mean for the church? We can certainly enjoy creation and what science reveals about it, letting it inspire us to worship. We should also support the scientists, science teachers and students in our congregations and encourage them in their work. Equally importantly, we need to take our role in caring for the earth seriously. The Hebrew words in Genesis 2:15 that are often translated ‘to till and to keep’ can equally well be translated ‘to serve and preserve’ the earth.

As Peter Harris, the co-founder of the Christian conservation organisation A Rocha, has said, phrases like ‘natural resources’, ‘ecosystem services’, or even ‘the environment’ come from an attitude that our surroundings exist solely for our benefit. We can start showing that we care by mending our mind-set and our language, and move on from there to practical action.

Many of the greatest disasters in recent history have been caused not by earthquakes or volcanoes but by human selfishness. Badly built buildings that can’t stand up in an earthquake, destruction of mangrove trees allowing coastal flooding when storm surges arrive, medicines made too expensive for those in low-income countries. Yes, the presence of suffering is an important question for Christians who want to share the goodness of God, but it needn’t be a reason to condemn the created world outright as ‘not good’, especially since God has pronounced everything he had made to be ‘very good’ (Genesis 1:31). The wonders of the world are something to enjoy, but they should also fuel a more practical form of worship, as we care for both people and creation.

Join us at Lee Abbey Devon for:

CELEBRATING AND CARING FOR CREATION
6–10 February 2017
with Ruth Bancewicz and Bob White
In the course of their work, scientists discover beauty, complexity and order in the world, leading to feelings of awe and wonder. How do these experiences relate to everyday Christian living? How can we care for the Earth? How can science help us worship God and celebrate his creation? This week includes talks and practical sessions – no prior scientific knowledge or experience required.