This article was published in the September to December 2019 issue of Rapport magazine. 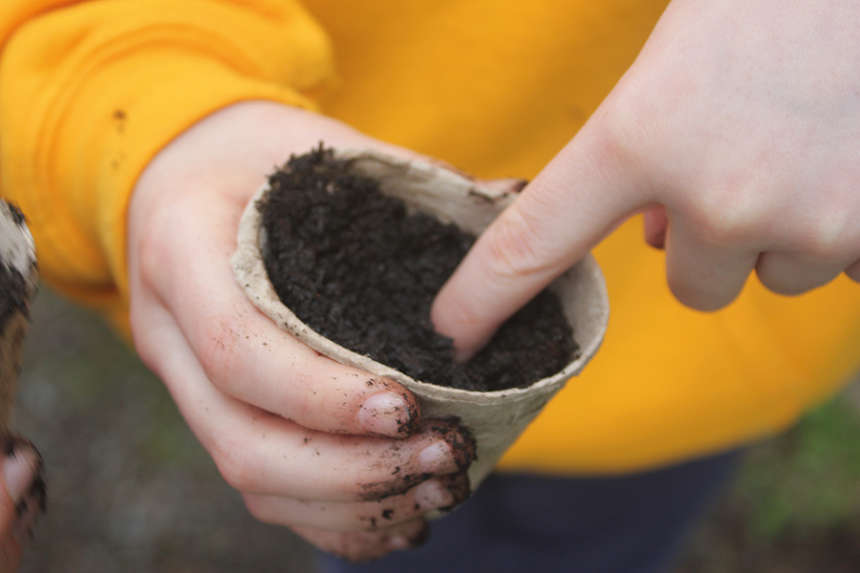 In the lead up to Easter, the Beacon Team held Easter Experience days. These were an opportunity for the Team to work with children from local schools, sharing with them the Easter story outside their usual classroom environment.

The day was based on six scenes, in various locations on the estate, which were dramatised in tableaux by members of the Beacon Team. Pupils were encouraged to use their imagination and their senses at each scene to place themselves within the story. We asked questions to challenge their thinking, and then they were invited to take part in a reflection at each scene to help them engage with the story.

Many schoolchildren hear the Easter story retold every year in primary school so, although the children who came were from Church of England schools, to be able to share the story in a meaningful way will help them to remember and appreciate it more. The children’s feedback at the end of the day showed they had learnt and understood from the experience. ‘He was friends with everybody, even those who didn’t believe in God’, said one. ‘Jesus died for us, so we could be forgiven for our sins,’ said another; ‘He was radical’ and ‘Now I understand what it means to be a Christian’, were just a few of the responses.

Children from year three up to year eight participated and were asked to imagine themselves being alive, over 2,000 years ago, in Jerusalem. We invited them to listen to the sounds around, to imagine the smells and sights they would have witnessed. They travelled with us to the Upper Room of an inn, where Jesus was meeting with His friends for the Passover meal. They were invited to show their care for their friends and classmates by washing each other’s hands (they didn’t fancy washing each other’s feet!) and several commented that it felt weird having others do something nice for them.

At The Arrest scene, the children reflected on people in the world who, like Jesus, are persecuted not for doing wrong, but for simply having views different from their leaders. We invited the children to hold a stone in their hands as they thought about innocent people who are treated badly for their beliefs and who speak out for what is right and then, as they placed the stones as a cairn, to pray silently for them.

Next, Peter was identified by members of the crowd as being one of Jesus’ followers – which of course he denied. The children were led in a question and answer session, with Peter sharing why he had denied knowing Jesus and how he felt about this. Of course, Peter was able to explain that he later realised he had done the wrong thing and that Jesus forgave him and he went on to play an important part in the founding of the Christian Church. The pupils were invited to hold a gnarled and rough twig, and then to place it into a fire as a sign of letting go of a painful memory, or a time when they had been let down by someone or had let someone else down. ‘God can always be trusted to forgive us and take our sins away’ (1 John 1:9), and ‘God willingly forgives and God’s love is always there’ (Psalm 86:5) were shared with the young people as truths for them to reflect on.

An incredibly powerful point of the day was The Sentence scene – when Pontius Pilate sentenced Jesus to be crucified. We asked the children to take part in a Conscience Alley – sharing what they would have wanted to say to their friend Jesus, as they saw him alive for what they thought would be the last time. It proved to be a very poignant time of reflection, with cries of ‘I love you, Jesus’, ‘I’ll always remember what you taught me’, ‘I’ll always remember how you loved everyone you met’ and ‘Thank you for treating me like your brother’, heard as Jesus slowly walked past the crowd dragging the cross with him to the place of his death.

At the Lee Abbey crosses each pupil was given a paper heart to hold as we reminded them that each of them is special and loved by God, and that Jesus died for every one of us.

The final scene The Surprise took place at the garden tomb – with the small stone shelter at Jenny’s, a classic viewpoint on the estate, turned into the tomb. As the group watched the women weep for Jesus and then followed them to see the empty tomb and the folded cloths, Jesus walked up behind the group – for He was alive. We invited each of the young people to plant a seed into a pot of soil to take away with them, as a reminder of the new life that is celebrated at Easter time.

We encouraged the children to walk with Jesus, back to The Beacon Activity Centre, where we told them about the people Jesus met on the road to Emmaus and how we are all part of the Good News story.

Working with school groups in this way was a real blessing to the Beacon Team. There were many moments of laughter behind the scenes – such as when the Roman soldier’s ‘armour’ was blowing around in the windy weather so her face couldn’t be seen, and when Jesus forgot to appear at the tomb and had to be prompted three times!

We saw God at work through these Easter Experience days and pray that He will continue His work through the young people. We hope to develop further links with these schools and have already been approached by some who would like to come for a similar Christmas Experience day in December.